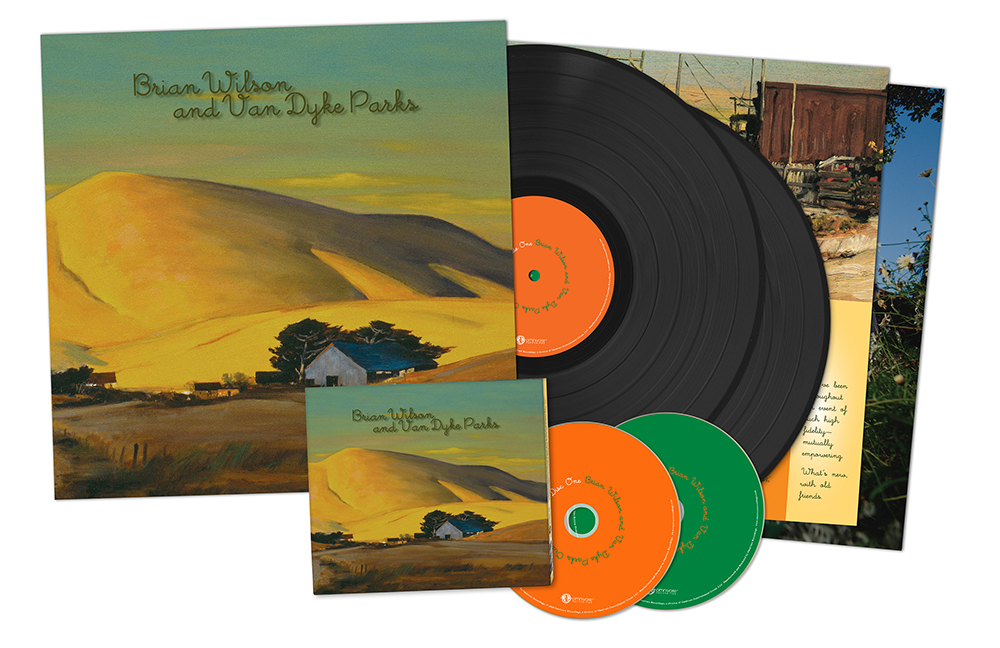 The original recording sessions for Orange Crate Art spanned 1993-1995. For this second installment, we feature this June 1995 interview with Van Dyke Parks conducted by editor emeritus Lee Dempsey along with (media and marketing musicologist) Elliot Kendall. The pair sat down with Van Dyke to discuss the (then) upcoming release, which was released on Oct. 24, 1995.

ESQ: How did the Orange Crate Art album project happen?

Van Dyke Parks: While working on the Don Was-produced “I Just Wasn’t Made For These Times” documentary, Brian first called me to get the number of a steel band man, Robert Greenidge for “Proud Mary.” Robert is brilliant – an absolutely genius musician, and he played for Brian on that tune. That was the first call I had gotten from Brian for a long time – about getting musicians … and that’s the call that started Orange Crate Art. So, I called him back and asked him if he could guest on a number. … That song led to another, and so on.

ESQ: How would you describe Orange Crate Art?

Van Dyke: It’s a Brian Wilson album with Van Dyke Parks producing and/or songwriting. The most important element in the album is Brian’s voice and participation. So, to me, it doesn’t matter what they call it, or whose album it is. There’s nothing that obscures the good intentions of Brian’s heart, so beautifully carried forth with this intricate and powerful music.

Van Dyke: “Movies is Magic”: a boy takes a girl out to a drive-in theater in a convertible during a rainstorm. “Orange Crate Art” and “My Jeanine” have to do with apples and oranges; “Hold Back Time” gives the album a sense of time and place, somewhere in the Napa Valley in Northern California, within living memory. Music is my hobby … songwriting is my hobby. It’s the thing I love the most and also whatever it is, is a success. This album is continuing an old friendship, giving it new life force – meaning – a chance for me to admire Brian Wilson and his vocal artistry.

ESQ: What was the process used to develop and record the songs for Orange Crate Art with Brian?

Van Dyke: Usually, I construct everything on synthesizer – find a key – a tempo – and so forth. After that is done, I (would) invite Brian to listen to it and make his comments about it and see if he really could do it.

Some of them, we’d come in and we would just get a couple of verses doubled – the melody, etc. And we met like that for over a year, in our mutual free time, which was a lot harder than it seemed …

It’s not just like dropping over to the Jones boys for a cup of coffee, or a stick of butter across a neighbor’s yard, etc. It’s not that easy. … I wanted the album to feel like it’s born of goodwill, a casual and free nature. The album already had the value of a personal reunion, and I hope it will be to public advantage, and it doesn’t matter to me whose record it is; it’s not a point of pride. I feel very fortunate to work with Brian … I am surprised that he lent his imagination to my songs and helped me take them forward. I think they sound terrific!

ESQ: At one time the title of Voice of America was being considered for the album.

Van Dyke: I thought that Voice of America would make a great artwork cover too. I think that that might have embarrassed Brian as (being) perhaps too immodest. That’s why I think we gravitated to Orange Crate Art. What the album does, or might do, I have no idea; that’s too hard for me to know! I can’t know how it will be interpreted. … It (the album) idealizes the California experience, so, that’s what I’m trying to do and that’s what I do, and that’s how I live my life. It’s a confirmational process – I don’t want to sound religious here, but I think that that’s what humans should be used for. Music is a perfect system to glorify God, and that’s why we are here – to glorify God – do each other honor and defend the faith. And that’s why I do my songwriting! That’s what this is about!

Van Dyke: That’s very good … that’s very nice. … I’m telling you the most patient person involved in the project was Lenny Waronker. … Lenny said, “You know, when you do anything good that takes this much time, you’re bound to ‘stub your toe’ from time to time, but what you’re doing is important for other reasons, so you should keep going.”

So, you know, you’ve got to put it all in perspective. Orange Crate Art is just another notch in Brian’s belt, as far as I’m concerned. … Brian is an artist of great cultural merit. In a national sense, he is a cultural article of significant importance, his music having been identified with the presidencies and so forth. He’s spanned the decades with his work.

Visit our store to purchase any of our available issues.

Check on your subscription status

Letters To The Editor